The Alice Awards are coming up fast! Our annual awards ceremony is this Saturday, October 2nd, from noon to 3:00 p.m. at the new Ankeny West Plaza in the Cart Blocks of Downtown Portland (770 W. Burnside). Celebrate community leaders over food, drinks, games, and live performances-Tickets are only $15! 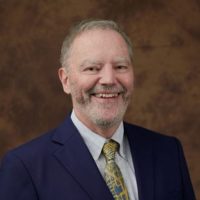 Metro Councilor Bob Stacey is the 2021 recipient of the Bud Clark Lifetime Achievement Award, which recognizes sustained work toward achieving The Street Trust’s vision of a complete, safe, low-carbon, multimodal transportation system that contributes to equity in access, opportunity, health, and prosperity for people and communities across the Portland Metro Region and beyond.

Councilor Stacey was the TriMet Executive Director for Policy and Planning during the construction of the Yellow Line MAX in the early 2000s and has always been a visionary, linking land use, transit, active transportation and community for urban sustainability. “Councilor Stacey’s impact on our transportation systems spans the lifetimes of some – such as myself! – who are current advocates for a more equitable, safe and just transportation and land use system,” says Vivian Satterfield, Strategic Partnerships Director at Verde. “He’s played a massive role in shaping our region, from fighting the freeway expansion of the Westside Bypass and in supporting the vision of our region’s first ever BRT system with the Division project. His style of leadership comes from a place of genuine curiosity in engaging the people around him as people first in order to find values and common ground.” 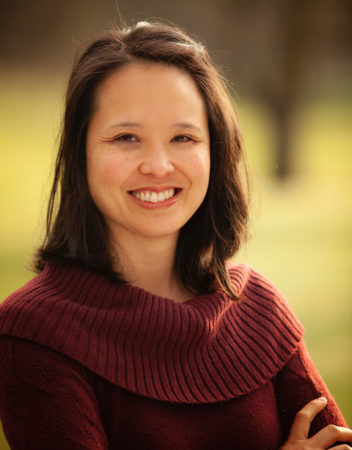 The 2021 Alice Award recipient is State Representative Khanh Pham (OR D-46). Rep. Pham has a long history of community building along 82nd Avenue and in The Jade District, where she has championed safety for people who live, work, shop, and play along the street and across East Portland.

Khanh was a founding leader of and spokesperson for the groundbreaking Portland Clean Energy Fund Initiative, which passed in 2018. As a newcomer to the legislature, she has tirelessly forged connections to bridge divides. “Rep. Pham has a deep commitment to environmental and climate justice. This year, she demonstrated decisive, visionary leadership in securing emergency and long-term funding for the transformation of 82nd Avenue and its transfer to the City of Portland from the Oregon Department of Transportation,” says Kimberlee Stafford, Chair of The Street Trust Community Fund’s Board of Directors. Prior to the legislature, Pham served as the Interim Alliance Director at the Oregon Just Transition Alliance and was Environmental Justice Manager at the Asian Pacific American Network of Oregon (APANO). 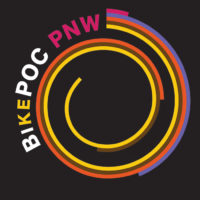 BikePOC PNW will receive the inaugural Elizabeth Jennings Graham Transportation Justice Award for their leadership in actively creating intentional space for bike riders of color in our region. BikePOC PNW co-founders Will Cortez, Silas Sanderson, and Sukho Viboolsittiseri formed the group in early 2021 to create a community for bike riders from Black, Indigenous, and Communities of Color in our area and it has grown quickly. “We appreciate their investment in creating a new, vibrant, and inclusive community for BIPOC cyclists in the Portland metro area through organized rides such as the ‘Chingona’ and ‘Party Pace’ rides,” explains Thomas Ngo, Chair of The Street Trust Action Fund’s Board of Directors.

“The Street Trust is excited to recognize three amazing community members and organizations for their activism and commitment to equity. Their drive and determination are inspirational and lay the groundwork for a better transportation future,” says Sarah Iannarone, Executive Director of The Street Trust.

DJ ALoSo will kick off the block party at noon as well as play sets throughout the day, culminating in a dance party at the end.

DJ ALoSo is a passionate music curator who believes in community, diversity and inclusivity. His musical influences range in appreciation for eclectic, world inspired, tribal influenced genres that journey through the soundscapes of both light and dark aspects of sound, vibration and rhythm. His artistic Latin influence emerges through a primordial essence, and is expressed through the sharing of music–intended to bring people together through the energy of love and balance.

At 1:00 p.m., Son de Cuba will take to the stage. Son de Cuba is a quintet of musicians from Cuba, Chile, Mexico, and the US. They have roots in Latin, African, and jazz rhythms and blend their vast knowledge of different beats together in classic and modern Latin songs, exuding energy and happiness. Dancing is encouraged!

At 2:00 p.m., take in an exhilarating performance by White Lotus Dragon & Lion Dance. The largest dragon & lion dance team in all of Oregon, White Lotus brings a unique approach to a centuries long tradition, continuously exploring new and creative ideas. 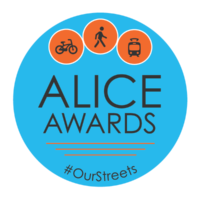 In line with a greater focus on equity and inclusion, The Street Trust has transformed this year’s Alice Awards from a high-ticket-price dinner to an outdoor, community-oriented block party at Friends of the Green Loop’s new Ankeny West plaza. Live performances will include DJ ALoSo, Son de Cuba, and White Lotus Dragon & Lion Dance. The party will also feature food trucks, a beer garden, a swag table, a raffle, and a dance party. Attendees will get an exclusive preview of The Street Trust’s #OurStreets Campaign, which launches this fall.

In addition to the awards ceremony and live entertainment, the event will feature a raffle, the food carts of the Cart Blocks, a beer garden, ring toss–to win bottles of local wines for adults and candy and/or comics for kids, a blender bike to pedal your own non-alcoholic piña colada, limited-edition t-shirts, and a photo booth!

Volunteer shifts are still available to help make this event the best it can be! Sign up here.

Based on the latest public health data and analyses, we are reasonably confident that it will be safe to gather with a limited size group in Multnomah County on October 2nd and are designing our outdoor location to maximize social distancing. However, it will only be safe if people who attend are fully vaccinated and wear a mask except when eating or drinking. We are requesting that people who are not vaccinated, unable or unwilling to wear a mask, or who have been in close contact with someone with suspected or confirmed COVID-19, please refrain from joining in person and instead tune into our streams via social media and send a financial contribution to keep The Street Trust’s important work going. 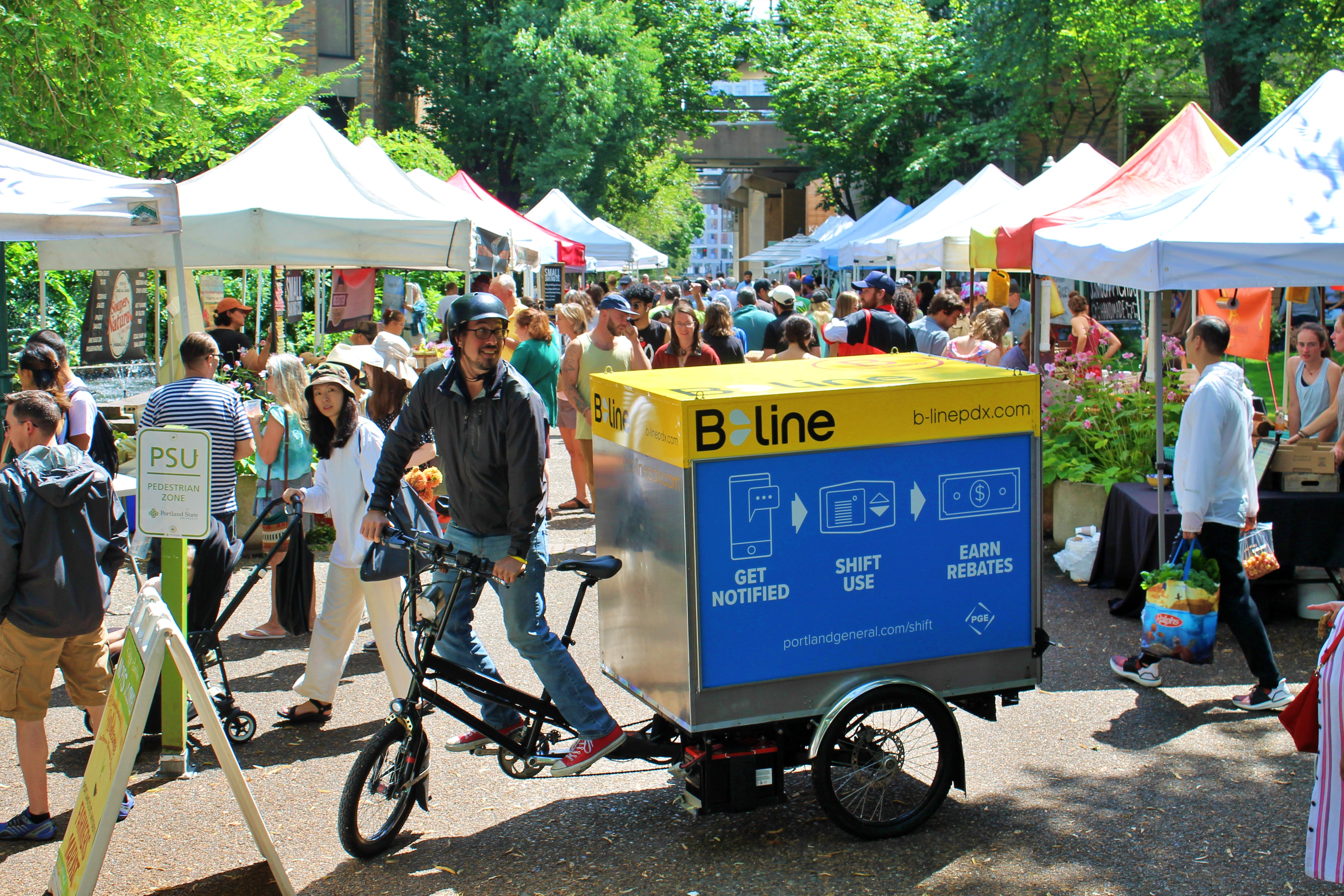 We’d like to officially welcome our newest Champion Business Member B-Line to The Street Trust!

B-line is passionate about our community and the planet! As a certified B-Corporation, they work every day by working with their customers to reduce freight congestion, CO2 emissions, provide local green-collar jobs, streamlined recycling services, and helping feed those in need via their B-shares program.

Since 2008, B-line Urban Logistics has done this by offering advertising, warehousing, logistics, fulfillment, and zero-emission delivery services to an ever-growing group of businesses in Portland, Oregon. B-Line customers value the delivery time they save, the cost savings of a centrally managed warehouse with dedicated staff, and their ability to help scale quickly with delivery, fulfillment, warehousing, and advertising services in a centrally located solar-powered warehouse on SE 7th and Salmon street.

B-line’s founding premise, that business can be a catalyst for positive change, is quantified in their 2019 and 2020 impact reports.

Welcome to The Street Trust Family! 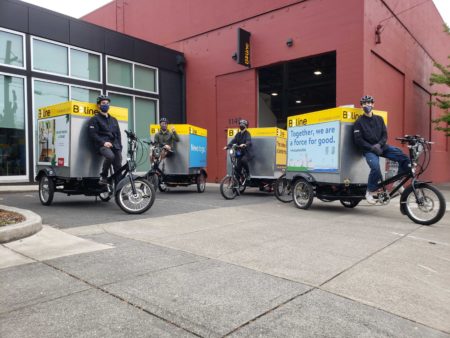 Become a Business Member and join The Street Trust Family.

School is back in session and with students traveling to in-person classrooms again, drivers need to remember school routes are everywhere and #DriveLikeIt!

The Street Trust has partnered with ODOT, Metro, the Portland Bureau of Transportation, and Safe Routes to School programs to share this message across the region. Yard signs have been distributed and Trimet buses are running bright pink ads reminding drivers to slow down and watch out for kids.

Want to get the message out in your community? Visit our toolkit to download campaign posters and create your own social media posts! 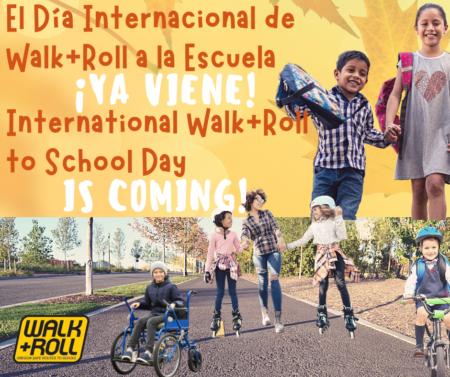 Wednesday, October 6 is International Walk+Roll to School Day! Is your school ready to celebrate and encourage their students to walk and roll?

International Walk+Roll to School Day is a global event that involves communities from more than 40 countries walking and rolling to school on the same day. It began in 1997 as a one-day event and over time, this event has become part of a movement for year-round safe routes to school and a celebration – with record-breaking participation – each October. Today, thousands of schools across America – from all 50 states, the District of Columbia, and Puerto Rico – participate every October.

Visit the Safe Routes to School website  to learn individual and whole-school activity ideas, including how to sign up for our next student art contest! 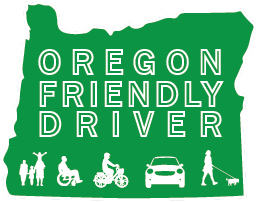 Want to learn to be a safer and friendlier driver while out on the road? Attend a free virtual Oregon Friendly Driver class !

The Street Trust will teach you how to drive around people walking and bicycling by talking about laws, infrastructure, and common mistakes that people make while out and about through our interactive virtual class. This free class  is appropriate for drivers of all skill levels from new drivers to professional drivers!

Want to host a free Friendly Driver class for your workplace?Request a training !

On September 1st, The Street Trust partnered with the Community Cycling Center for the #ParkrosePedal by the Parkrose Middle School. The event was dreamt by and organized by Nichole Watson, a local bike advocate looking to improve visibility and representation in the cycling community, and the Parkrose School District. Three #TST leaders supported the “bike rodeo” activity and joined dozens of community members for a walk and ride to build a more inclusive cycling culture in the region.

TST was thrilled to see such a large turnout and is always seeking volunteers to participate in and help organize more of these types of events in the future! 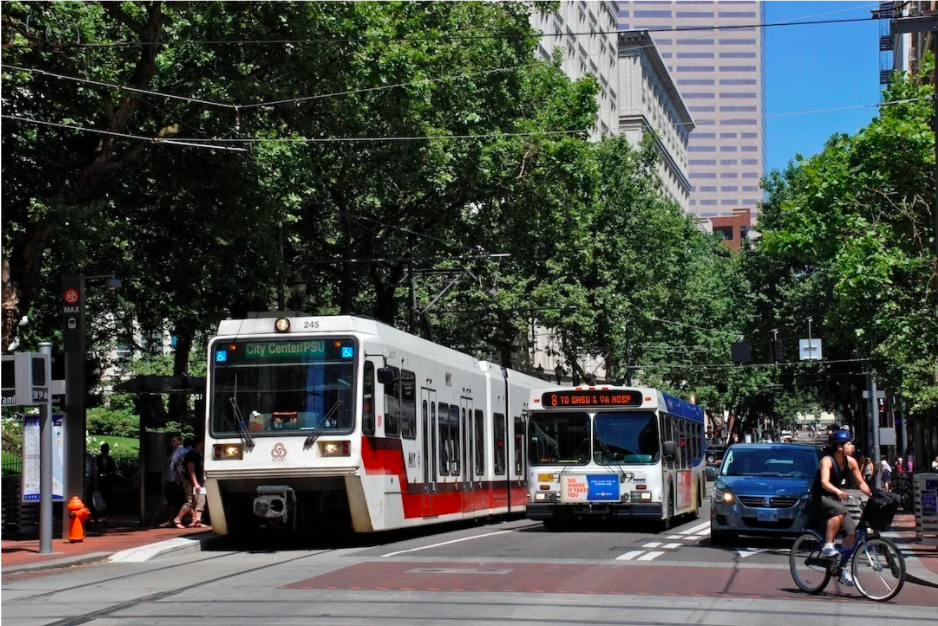 The Street Trust’s 2021-2023 Strategic Plan calls for “a complete, safe, low-carbon, multimodal transportation system that contributes to equity in access, opportunity, health, and prosperity for people and communities across the Portland Metro Region and beyond.” It all sounds great, but what do we mean by multimodal?

For many people the concept and characteristics of a multimodal transportation system is new and sometimes unclear, which is why I, your new Street Trust Policy Transformation Manager, am here to offer some insight as to what we mean when The Strust Trust demands for a “multimodal” system and why we think it’s important.

A multimodal transportation system is one that offers more than one way to move around. For example, in the Portland Metro region there’s already a diverse suite of modes people use to get around. People can drive, walk, ride the streetcar or bus, hop on a scooter or one of Biketown’s shared electric bikes. However, not everybody has equitable access to all these different modes, and the ease of use and efficiency of each mode is affected by a history of disproportionate investment in infrastructure centered on private automobiles.

Having multiple modes at hand is only one small piece of the multimodal pie. Another critical (and historically underfunded) piece, is infrastructure that allows for convenient, safe and accessible use of other modes. The cost and impact of these investments vary tremendously from mode to mode, but in a complete multimodal system, a single investment or piece of infrastructure can have a positive impact on many modes. For example, look at mobility lanes, which benefit cyclists, skaters, scooterers, and people with limited mobility.

Street users deserve a robust and connected suite of transportation options that allow them to safely travel anywhere they need to go. After more than a century of dominating our streets we think it’s time for cars to make way for the future and share the road.

If you live in the Portland metro area and want to improve multimodal transportation in your neighborhood, become a member of The Street Trust or volunteer with us when we hit the streets to improve the road network.