The Street Trust partners with a wide range of organizations from non-profit, labor, business, health, education, faith, and other sectors. These partnerships make our advocacy more powerful, by bridging communities across differences, issue areas and geographic focus.

We’re so happy to have forged a partnership with Teatro Milagro this year. What began with answering a request for a blender bike blossomed into five fun in-person events with more to come.

Milagro’s thirty-eighth season launched with a community art project, La Bici, an episodic video play that brought together ideas of bike safety and how it relates to art and the community. Naturally, The Street Trust was a perfect fit for supporting their vision by lending our experience and volunteer power to some of events!

We joined Milagro as bike safety escorts for two community rides–Día de la Madre in May and Día de Muertos in October. We also activated the street outside the theater on Sundays in August, creating “mini Sunday Parkways” to help fill the void so many of us are feeling with no formal Sunday Parkways events this year.

After a year of very little in-person contact, it was wonderful to create so many memories with our new friends at Milagro.

Do you want to be notified next time we’re looking for volunteers to help staff an event like the Día de Muertos ride? Fill out our volunteer form and join the fun! 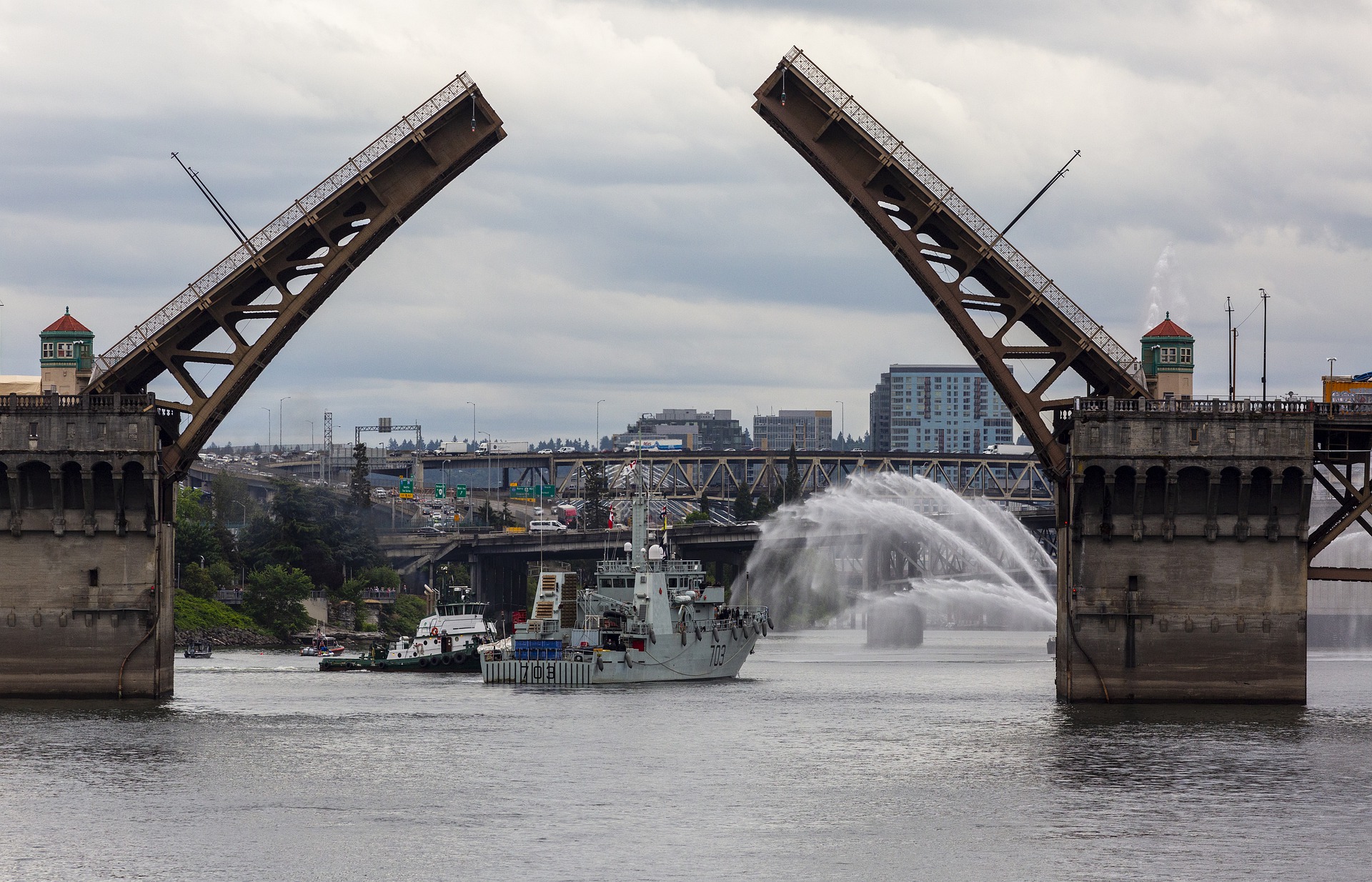 We are a membership advocacy organization and couldn’t do our work without the support of our terrific members! We’ve recently brought back monthly meetings for our members–virtual for now, but returning to in person soon.

We’ll welcome special guests from Multnomah County who will brief us on the Earthquake Ready Burnside Bridge project. Then members of the Human Access Project will share their Burnside Bridge Pedestrian Access Ramp concept. We’ll have plenty of time for Q&A for both groups after the presentations.

Registration is required so please find the invite in your Member Alert email. Missing the registration link or need to check the status of your membership? Email TST Membership Services at [email protected].

Not a member yet? Join us! Individual membership dues are $5 monthly, or a $40 one-time contribution.

Passage of President Biden’s long-awaited $1.2 trillion bipartisan infrastructure bill, the Infrastructure Investment and Jobs Act (“IIJA”), earlier this month set the transportation sector atwitter with words like “once-in-a-generation,” “transformative” and “climate game-changer.” When added to money already coming Oregon’s way from the Feds, the IIJA means the Oregon Department of Transportation (ODOT) stands poised to spend about $4.5 billion over the next five years.

As the 2022 election cycle heats up, candidates, electeds, and agency heads are banging the git-er-done drum in unison. They argue we should leverage this deluge of dollars to break the political gridlock and push through a suite of major interconnected highway expansions around the Portland metro region. The drum beating has reached a rapid tempo. One director is pushing for action while the “stars align,” as he said in his update to the bi-state legislative committee overseeing a proposed I-5 bridge project across the Columbia River.

It’s hard not to match the drumbeat, but ODOT is plagued by cost overruns on major projects alongside a half-billion-dollar annual maintenance backlog. The chance to increase revenues through tolling, now expanded thanks to the passage of HB 3055, has distracted ODOT from pursuing good policy and centered its focus on trying to find a way out of a financial pothole.

The fact is ODOT is severely overextended, yet wants Oregonians to trust them as they embark on a speculative freeway widening scheme intended to address congestion and get Portland-area traffic – especially freight – flowing like it’s 1966 when I-5 construction was completed. Even if ODOT’s new Urban Mobility Office – created expressly to coordinate the freeway expansions and concurrent tolling project – could successfully execute its mission, the logic behind its policies is fundamentally flawed.

We cannot build ourselves out of the congestion hole with freeway expansions, so ODOT needs to put down its shovels and stop digging.

On top of the climate and racial justice impacts of interstate freeway widening, the projects simply cost too much and fail to deliver on the congestion relief or free-flowing freight mobility they promise. ODOT’s insistence on these projects is especially worrisome because we know that better policies exist. For example, we need to be dynamically pricing the system to manage demand (for example, by increasing the cost of driving at peak hours). And, we should be investing in walking, bicycling, micromobility, and transit to unclog our roadways and reduce greenhouse gas emissions. Every lane mile of highway ODOT builds costs taxpayers millions of dollars while  adding drive-alone trips  to the roads when we need to be reducing the number of cars on the road and the miles they travel.

Instead of dancing to ODOT’s beat, legislators and the Oregon Transportation Commission need to seize this opportunity and direct ODOT to start banking on the ROI of active transportation and transit investments if they hold any hope of unraveling gridlock and getting our state’s green leadership back on track. (And no, electric vehicles will not save us.)

We have less than a decade remaining to change course and preserve this planet for future generations. At COP26 in Glasgow this month,mayors from across the globe announced that investments in public transit must double to meet our climate goals. Those investments should not perpetuate the status quo.

Oregon’s transportation system contributes 40% of Oregon’s GHG pollution,and serves as the setting for the deaths of hundreds of people every year, while injuring exponentially more. It fails to serve people who don’t drive or own cars – approximately 30% of Oregonians don’t drive, according to a recent presentation to the Legislature’s Joint Transportation Committee. The maintenance of the status quo will only increase the ongoing impacts of systemic racism that have resulted in people from Black, Brown and Indigenous communities being more reliant on walking, biking, and public transit to get where they are going and more vulnerable to danger. The disproportionate burden borne by already trauma-impacted and vulnerable members of our community is unacceptable. We cannot continue to invest in a system that leaves so much of our population underserved and behind.

The health impacts and disparities of our current system should be argument enough for ODOT to change course from status quo investments. Oregonians deserve transportation options that are safer, greener, more accessible, and more equitable than in previous generations. Unfortunately, for every good dollar in the infrastructure package dedicated to climate resilience, active transportation, and transit, there are two more that incentivize driving alone and perpetuating an unjust and outdated system. This is no time to be taking one step forward and two steps back with our mobility investments.

The windfall to Oregon from this infrastructure package (along with Build Back Better Act, should it pass) is a rare opportunity to make equitable, climate-smart investments. These are the investments that the Oregon Legislature, Transportation Commission (OTC), and local DOTS previously told transportation advocates were not possible because “we just don’t have the money for that.” Now, that excuse doesn’t have a wheel to drive on.

We can upend the status quo by taking a few, critical steps (in no particular order): first, completing the Oregon Bicycle and Pedestrian Plan; second, exponentially increasing transit service and coverage across and between our urban areas; third, transferring our orphaned state highways to local communities; fourth, engage and learn from representative and inclusive organizations, such as those leading the Clean and Just Transportation Network; and, fifth, ensuring that we will have frequent high-capacity transit, local bus service, and active transportation infrastructure across the Portland-metro region, including along the I-5 corridor and across the Columbia River.

Unfortunately, what we’ve heard from ODOT thus far is too much money planned for major highway projects and far too little committed to reducing and regulating greenhouse gas emissions — projects that would align with Governor Kate Brown’s Executive Order on Climate Action. When asked by the media at a briefing last week whether ODOT’s future infrastructure spending would reduce vehicle miles traveled (VMT) and greenhouse gas emissions (GHG), Assistant Director Brouwer could not comment.

When it comes to transportation infrastructure spending in Oregon, the only correct official answer should be, “Yes, it reduces VMT and GHG.”

This is a once-in-a-generation opportunity to focus on building a future transportation system that works for all Oregonians — one that is equitable and safe for people of all races, genders, zip codes, ages, and abilities. When our descendants look back at us in this moment a century from now, will they thank us for blessing them with mobility that is universally safe and accessible – a human right, even – or did we leave them more of the deadly and polluting system that we unfortunately inherited from our forebears a century ago?

Note: This essay originally appeared in The Oregon Way, Nov 26, 2021 – sign up for their mailing list for the first look at our quarterly contributions to their newsletter.