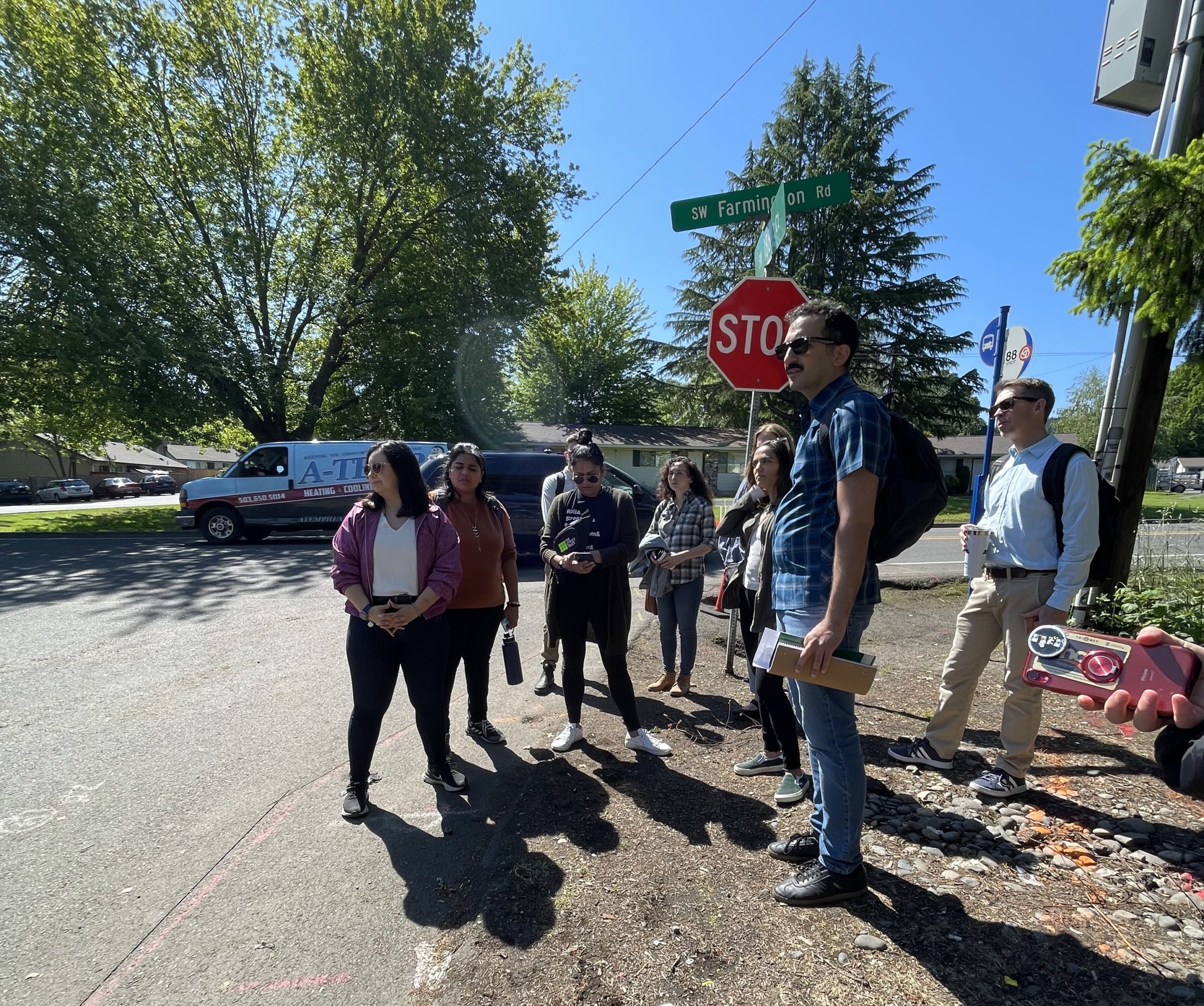 We invited diverse participants, including staff from community-based organizations, Commisioner Fai’s office, an Oregon House Representative (and Senate candidate), as well as agency staff from the Oregon Department of Transportation and Washington County’s Planning Division.

The Street Trust believes that by directing the attention of our members and energizing them with ideas for how Farmington Rd. could be improved, this event could lead to infrastructural transformation on the ground. 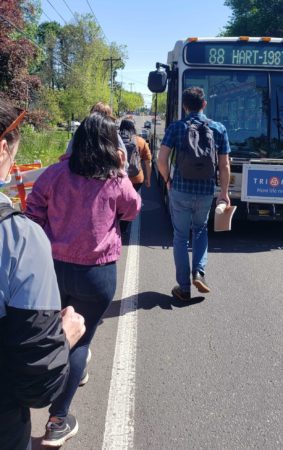 Why is taking our mission to the streets important?

In the age of COVID-19, many of us have grown accustomed to the luxury of remote work. We’ve seen our morning commute to offices and other locations transform into the simple wiggle of a mouse and adjustments of our cameras. As a result, many of us have become disconnected from the experiences that many members of our communities still live daily – including the requirement to show up to all the places they need to be regardless of whether or not they have access to their own car. It is also often the case that communities that rely on transit, walking, and rolling for mobility have limited capacity to shape in policy discussions without support from organizations like The Street Trust.

We conducted our study tour on foot and by TriMet MAX and bus so all of us could experience together the challenges – and serious danger – that people who don’t drive across our region face when trying to get from place to place throughout their day.

Washington County has a funding mechanism called the Urban Road Maintenance District (URMD) with which you may not be familiar. The URMD provides preventive road maintenance services for public roads within its boundaries, except roads that are designated as arterials or collectors on the Washington County Transportation Plan. About 430 miles of neighborhood streets have designated URMD maintenance funds.

The Urban Road Maintenance District (URMD) was created by the Board of County Commissioners (BCC) and approved by voters in urban unincorporated Washington County in 1987. It is a county service district, formed under ORS Chapter 451. URMD Ordinance No. 4.

While originally created for road maintenance, in 2011 URMD funds have since been allocated to improve pedestrian and bicycling safety, some of which we were able to observe during our tour.

There was a noticeable difference between ODOT-managed and Washington County-managed facilities. As we’ve seen across the region the lower emphasis on safety for pedestrians and cyclists leaves many wanting more from ODOT.

In the larger context, we would be remiss if we didn’t highlight for you the immense difference in the safety and accessibility of the right-of-way for people walking, rolling, biking, and accessing transit along Farmington Road. There are major decisions about regional transportation funding currently underway, including the choice to spend billions of dollars expanding highways around our region. These choices come at a great cost to current and future Oregonians – not only in in terms of the debt they’ll be saddled with but in terms of opportunity costs as dangerous roadways like Farmington Road (where people live, work, play, and pray) remain deadly and go unimproved.

Next Steps for Washington County

Washington County’s Major Street Improvement Program (MSTIP) is heading toward a decision point where it will be voted on by county commissioners. Currently there is a request for funding a complete streets project between 173rd and 209th along Farmington. The Street Trust is highly supportive of this project (among others) and highly encourage you to offer feedback once the public comment period for the MSTIP opens up in July.

This was TST’s first policy tour since launching the #OurStreets community mobilization campaign. Our goal is to reach, connect with, and mobilize people from all walks of life and across sectors and spheres of influence for better outcomes. We think it’s a great model and our hope is to do similar tours along other key corridors in our region. But we can’t do it without you!