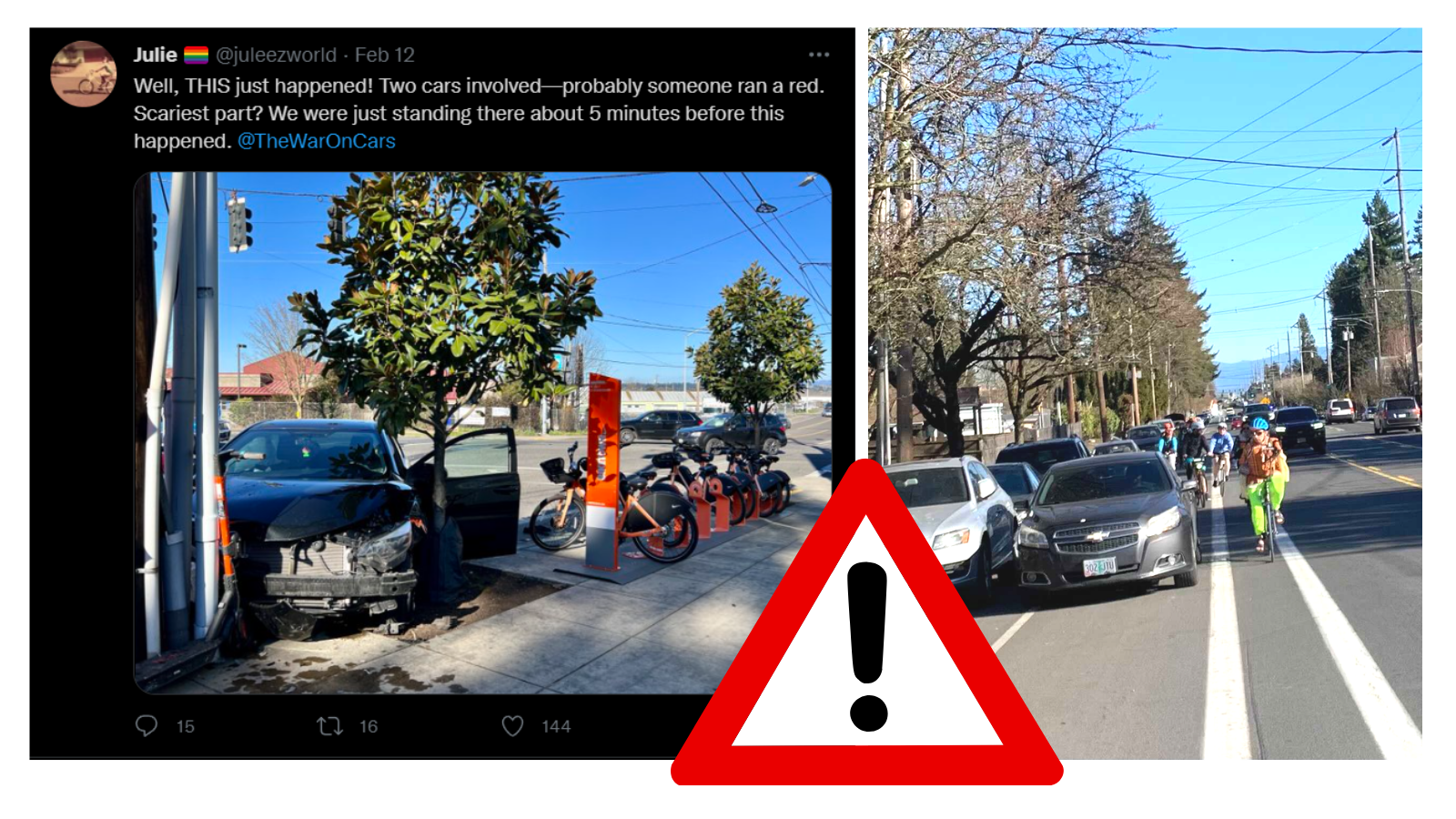 It’s time for Oregon’s leaders to reject the old—dangerous and deadly—normal and to create a safer mobility system.

“We want to welcome you to our WeBike ride, a monthly program to empower women, transgender, and non-binary people to safely ride…”

We had just kicked off our event outside Hacienda CDC, at the corner of NE Killingsworth and Cully in Portland. The plan for the day was to tour the neighborhood and explore ways that the City of Portland (PBOT) could improve safety not just for people on walking or riding bicycles, but all street users, even those driving. We’d barely finished our introductions when we heard the boom of a crash next to us on the street. A car had slammed into the utility pole right next to the BIKETOWN station where just five minutes earlier several of us had stood in a group to unlock the shared bicycles for our event.1

You don’t need to be a daily sidewalk or bike lane user to feel how close to home the epidemic of traffic violence is hitting—we’re all feeling it daily, regardless of our travel mode. This week, the New York Times reported per capita vehicle fatalities in the U.S. increased 17.5% between summer of 2019 and the same time in 2020—the largest two-year increase since World War II. Oregon is, sadly, outpacing the national trend, with statewide fatalities up 22% in the same period. And Portland has posted its highest fatalities in three decades.

As we round the bend into a third year defined by COVID-19, we know too well the extent to which the pandemic has exacerbated existing social problems and inequality. This is evident when considered alongside the recent report from our partners at Oregon Walks who found that “people who identify as Black, who are experiencing homelessness, who are Older Adults or who are Persons with Disabilities are all at a disproportionately high risk of being killed in collisions.”

The intensification of vulnerability during the pandemic is reinforced by a recent announcement that 70% of pedestrians killed in Portland last year were people experiencing homelessness; many were living along streets identified in the city’s “high crash network.”

As the reports of these rising fatalities sound alarms, there’s no shortage of attempts to explain away the problem. The NYT analysis referenced above blames “erratic behavior.” For the Portland mayor, homeless camps located near busy streets are the problem. Oregon’s Department of Transportation (ODOT) chalks it up to reckless driving, too few cars on the road, and too few officers to police them.

To me, this feels a lot like blaming a toddler for being cranky all day because they ate birthday cake for breakfast–is it the cake that’s to blame or the fact that it ended up on their plate in the first place?

Let’s be clear: crashes are a function of vehicle speed and volume. People are dying—on bikes, on motorcycles, on sidewalks, and, yes, inside autos—because drivers are going too damn fast. And they’re able to drive that way because our streets have been designed for frictionless driving, not human health and safety.

We’re glad to see U.S. Department of Transportation Secretary Pete Buttigieg acknowledge the traffic fatality crisis and attempt to address it via his recently released National Roadway Safety Strategy (NRSS). This Strategy marks an important display of leadership in the right direction. Systemic responses to epidemics are warranted, and we’re happy to see Buttigieg draw a throughline from the lack of safe streets to our inability to shift away from drive-alone trips toward low-carbon modes like walking, biking, and transit. We hope that the guidance issued in his roadmap trickles down quickly (along with adequate funding) to state and local governments.

But we can’t wait for Secretary Pete to come to our rescue: we need to rethink our streets—and our relationship to the streets—rapidly and locally. We can and must take swift action informed by best practices to reduce traffic fatalities immediately.

Oregon is in the top quartile of deadliest states for traffic crashes in the nation and the deadliest on the West Coast. This is a preventable tragedy that can be addressed by investing in a system that’s not as dominated by cars. When you improve the multimodal system and allow people to shift trips from vehicles, you not only reduce the number of vehicle miles traveled, you improve the safety of the transportation system.

A few state-level fixes we could make this month? The Oregon Legislature is considering a bill to authorize civilian review of traffic violations citations initiated by fixed photo radar, photo red light, and dual function cameras. Passing this will reduce costs for local police departments. (Currently in Portland, 100 percent of this review occurs on police over-time!) And more importantly, the Oregon Transportation Commission (OTC) will soon be directing ODOT how to allocate its one-time windfall from Biden’s infrastructure package.

OTC needs to address the traffic epidemic by steering these resources away from a funding mix that prioritizes drive-alone trips toward active transportation, public transit, and Safe Routes to School infrastructure, education, and safety programs, prioritizing those interventions and investments with the greatest climate and equity impacts. This is no time to undersign the deadly status quo by directing these funds to roadway expansions in conflict with our safety goals.

The City of Portland, ostensibly a global leader in transportation innovation, could also act swiftly to reduce its traffic fatalities. Instead of sweeping vulnerable people off streets by emergency declaration, it could by the same authority (and with the same money) reduce vehicle speeds, clear intersection corners, and improve lighting in high-crash areas. (Reducing speeds from 40 to 20 MPH increases the likelihood that a vulnerable street user survives  a crash by 70%.)

Portland needs to rethink its public safety budget, beginning with reallocating funding set aside to hire police officers toward completing unfunded and shovel-ready projects in PBOT’s High Crash Network. Expediting implementation of the “Nearer Term Recommendations” from the Pricing for Equitable Mobility Task Force would generate revenue to enhance investments in programs like the “Transportation Wallet” that encourages travel modes other than driving alone.

And finally, back to NE Killingsworth where this story started. PBOT is currently rushing through a paving project on that street which would leave that community with minimal protection from crashes just like the one we witnessed. Instead, project managers need to slow down and meaningfully engage residents to achieve the highest standard of protection for this already marginalized community – protection that could have possibly stopped that car this past Saturday from making it onto the sidewalk at all.

Making our streets safer is not going to be easy, but failing to act now will only continue the deadly trends, exacerbating disparities in communities with historical underinvestment. Investments in safe routes to school, pedestrian improvements, and safe ways to bike and access transit help strengthen the entire transportation network by reducing traffic fatalities and congestion, as well as improving public health. But sufficient funding is critical to provide these enhancements to the network.

It’s time for Oregon’s leaders to reject the old—dangerous and deadly—normal and to create a new mobility system and safe streets that keep our people safe and moving in the right direction.

This post originally appeared in the Oregon Way substack.