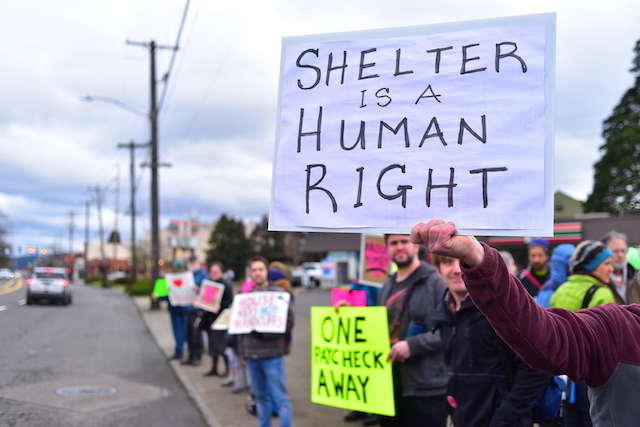 SAFE STREETS AND HOUSING ADVOCATES RESPOND TO EMERGENCY DECLARATION: DO NOT USE TRAFFIC DEATHS AS JUSTIFICATION FOR ENCAMPMENT SWEEPS; MAKE OUR STREETS SAFER AND EXPAND HOUSING OPTIONS WITH URGENCY

This week’s release of the Traffic Crash Report by the Portland Bureau of Transportation shows the devastating reality of how dangerous our current streets, roadways, and other facilities are. Portland Mayor Ted Wheeler shared on his own takeaway via social media: “Portlanders deserve safer streets, roads and freeways.” Indeed, all community members deserve better, which is why we strongly object to the emergency declaration to sweep encampments and further displace unhoused community members from alongside our most dangerous roads. The presence of unhoused people does not make our streets unsafe; rather, poor roadway design, ongoing neglect and deferred maintenance, recklessness in the form of speeding, operating a vehicle while impaired by drugs or alcohol, and other dangerous behavior are all well-documented reasons why there is this alarming uptick in deaths.

Portland is not alone in this upward trend, unfortunately: all across our state and nationally people are dying on roadways. Department of Transportation Secretary Pete Buttigieg acknowledges this national crisis and has taken steps to coordinate a response through the new National Roadway Safety Strategy. Nowhere in any transportation study, advocacy campaign or community forum seeking to address our roadway safety problems has it been suggested that unhoused people and encampments should be swept or outright banned as a partial solution to this crisis.

The deaths that our communities grieve over is a direct result of prolonged underinvestment, bureaucratic disarray, and broken promises that advocates for safe streets and those experiencing the brunt of our housing and economic crisis have consistently raised to decision makers at every level of governance. In June of 2021, Portland City Council unanimously passed the Paving the Pathway from Streets to Stability ordinance  (#190478), which codified our approach toward outdoor shelters and provided the regulatory tools we need to build six Safe Rest Villages (SRVs). City Council approved $24.9 million in the first tranche of ARPA (American Rescue Plan Act) dollars to build up six SRVs around the city. These shelters remain unbuilt, and the demand for appropriate housing and shelter continues to outpace the availability of temporary, much less permanent options.

Even if we did have ample capacity to shelter everyone potentially displaced through this emergency order, the Oregonian reported this week that it’s unlikely that most people swept from their residences would even know they have an alternative: 95% of unsheltered Portlanders said city workers didn’t offer shelter before camp sweeps. City officials proposing this emergency declaration are fully aware of the 9th Circuit Court ruling in Martin v. Boise that unless there is enough shelter space for the homeless population of Portland, we cannot prohibit them from camping outdoors on public property. Sweeping unhoused people without viable options for them to safely relocate and shelter is inefficient, ineffective, and inhumane.

We need to – and can – act urgently to save lives. The City of Portland’s elected leaders can take bold action to do that without further jeopardizing those living on our streets. Swift action can be taken to: