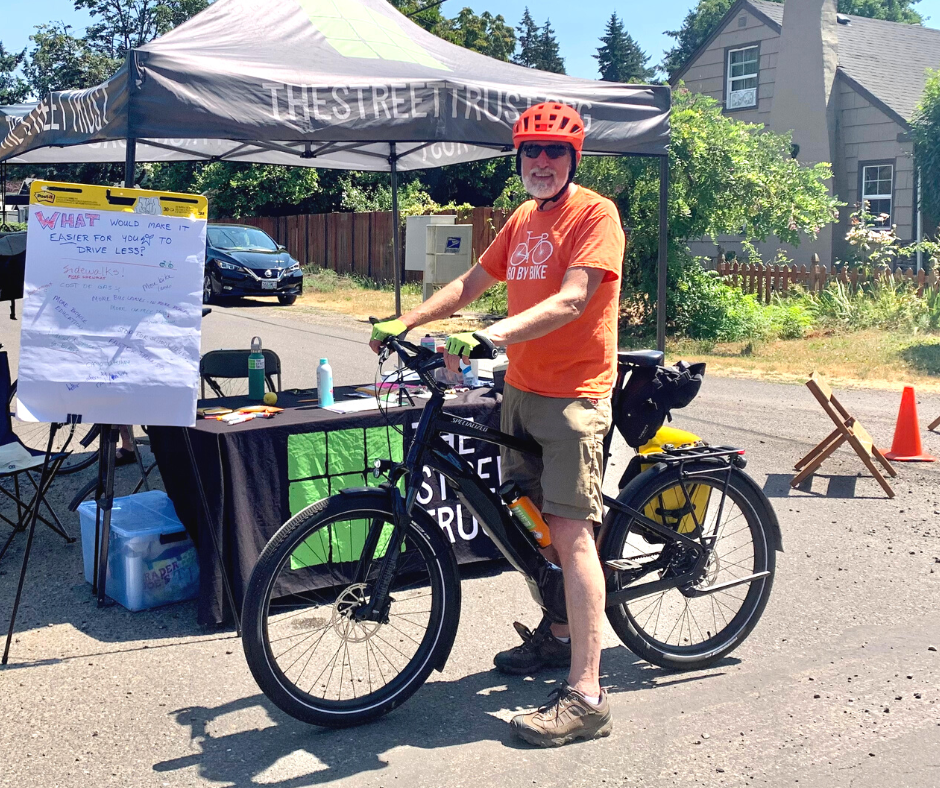 We can’t hide it it, we adore open streets events! City of Portland’s Sunday Parkways isn’t the only open streets extravaganza to return to the region this year: Carefree Sunday returned to Milwaukie after a three-year hiatus.

The five-mile route for Sunday’s event featured three parks and one church. There were a lot of street activations this year, including roller skating with free skate rentals, the region’s best mobile bicycle obstacle course, and live music.

An early-morning decision to end the event early – at 1:30 p.m. instead of 4:00 p.m. – to protect people from extreme temperatures was smart, but it also sadly meant the planned food trucks and beer garden weren’t part of the event.

The event drew lots of neighbors who lived directly along and close to the route and it was nice to chat with them about their transportation choices and options. It was enlightening to compare answers to our prompt, “What would make it easier for you to drive less?” at Carefree Sunday compared with responses we got at the recent Blumenauer Bridge opening celebration in central Portland the week prior.

Universal across both events was a plea for more streets for people and carfree days. However, in Milwaukie, where our Carefree Sunday perch was along sidewalk-deficit Stanley Avenue, there was an resounding call… the people want more sidewalks!

Using a 1.6-mile section of the Springwater Corridor Trail was an ingenious way to stretch the route to five miles by utilizing a low-conflict amenity. While people walking the route and families with small kids on bikes often choose a couple parks to focus on during an open streets event, there are always folks who want to complete the circuit and this was a great loop for that.

A highlight of the day? Milwaukie Mayor (and legilsative candidate) Mark Gamba stopped by our booth to confirm that Carefree Sunday will be an annual event. We encourage you to participate next year!

And don’t forget about Sunday Parkways in East Portland on the 21st and sign up to volunteer with TST – it’s a lot of fun!)