(This page is under construction. Please visit again for updates.)

On the 50th Anniversary of the Historic Bike Bill, SB 395 would have increased required expenditure on footpaths and bicycle trails from one percent to five percent of amounts received from State Highway Fund:

At the request of The Street Trust, Senator Floyd Prozanski sponsored this bill. On March 4, 2021, dozens of supporters statewide provided spoken and written testimony.

Although the bill did not move out of the Joint Committee on Transportation, we accomplished a lot through the process: 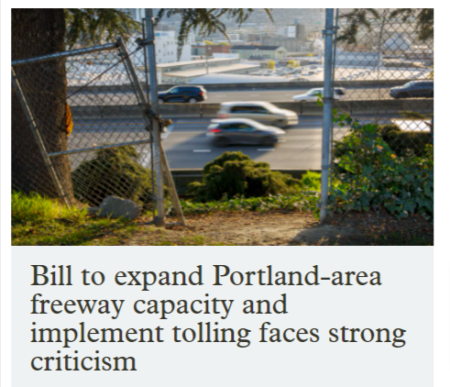 Following the death of HB 3065 (in part due to opposition from The Street Trust) state lawmakers continued to find a path to funding outsized freeway expansions across the state through HB 3055, including $30M annually for major highway projects and increasing the state’s borrowing and tolling for revenue capacity to fund outside projects prior to implementing demand management.

As we recover from COVID and face an unprecended climate crisis, we find ourselves at a critical juncture and unique opportunity to provide Oregon’s families and workers with the sensible transportation choices they need in ways that they can afford. What we’re grappling with now, in many respects, are the consequences of our success: Senate Bill 100 charted a course of constrained urban growth which means that more of us are traveling in congestion over shorter distances than ever before. However, the response to this situation should not be reverting to failed 20th Century tools like autocentric megaprojects but rather to stay the course on our legacy of policy innovation for the 21st Century. Now is the time for us to invest in cleaner, more sensible mobility options along with more equitable, sustainable, transparent ways of paying for them. Now is the time for us to muster the same bipartisan commitment that we once had for stopping urban sprawl and apply it to stopping freeway overbuild and investing in safe streets for all.